When I was newly married, I paid 10 times for salary deduction.
And when I finish paying, the second chair arrives.

I bought this chair in 1972 when I was 25 and working in the advertising department of Takashimaya. I just got married and lived in a 2DK apartment. I got a 10% discount on this 300,000 yen chair sold at Takashimaya, and I used the “Tenchaku” from the employee discount which gives you additional 10% off. Moreover, it was possible to deduct salary in 10 installments. Even so, my salary was 40,000 yen and my rent was around 20,000 yen, so it was a big purchasing.

The LC-4 is the one I longed for in those days when owning a masterpiece chair was considered a status. There are many foreign interior magazines in the advertising department, and masterpiece chairs were listed as “status chairs” in Germany’s “SCHÖNER WOHNEN” and Italy’s INTERNI”. A chair is a support tool for the body, and at the same time it is a symbol of status. The head of an organization is called the “Chairman”. Wanting a good chair seems to be a manifestation of deep psychology. I’m not good at organization and I want to be free, so I don’t want to raise my status at all.

The department store buys furniture from overseas in order to hold overseas exhibitions. If it remains unsold, it goes on a bargain sale. Looking back on it now, the LC-4 was the first step toward aunt lion (laugh). It wasn’t even a year before I bought my second Pernilla (Bruno Mathsson).

When I was 27, my daughter was born, and when I was 30, my son was born. The LC-4 was covered with horse fur, so children used it as a slide to play on. One time, I received a bonus of 300,000 yen. At that time, it was cash payment, so I go home and give my wife an envelope. There were only 30,000 yen in the envelope. I had a big fight with my wife. It’s because I shop life this, but that’s why I worked outside the company until midnight every day to make money. But that wasn’t enough.

I should stop buying chairs.
I thought that too.

When there were 7 or 8 chairs, I was satisfied with just using them myself. However, I bought a lot of interior-related books, so the room became too small, so I decided to move to a 2LDK one floor below the same apartment. But the number of chairs continued to increase, and when I reached 20-30, I purchased a 4DK apartment. Still, I had trouble finding a place to put the chair, and I had to ask my colleague to put it in their house. It’s also tough financially, and I’m always running out of money because I’m busy paying for chairs. Around this time, there was an incident that made me want to stop buying chairs. One day my kindergarten daughter had a fever. Even though I wanted to take her to the hospital, I only had about 100 yen in my wallet. I had a woman doctor who lived upstairs in the same apartment building make a house call, and it went all right. But when my daughter got well, I wanted the chair again.

I don’t know how many people have said to me, “I’m glad your wife stayed with you.” However, even in this kind of life, I buy almost everything my wife wants. I’ve been working hard and earning a decent income, and tried to atone for my wife’s troubles. Of course, the atonement continues even now (laugh).

When I joined Takashimaya, I asked the company, “I want myself to be a part-time employee, not a full-time employee.” I wanted to avoid on-size-fits-all work, and I wanted to work outside the company to earn extra income. For example, as a regular job, I drew illustrations for a monthly economic magazine called “All Life”. The illustration in the article is 1,500 yen per point. I forgot about the cover fee, but for this job I used acrylic paint Liquitex for the first time. With the theme of “wrapping”, I drew a teapot, a sake barrel, and a red sea bream grilled in salt. I was looking forward to the monthly payment. I did not have an airbrush yet, so I drew all of them with a single brush, and I was happy that four of them were published in the yearbook of the “Society of Illustrators” (New York), which I admired when I was in college. Including these days, I seem to be a person who lives with “engaged in two trades at the same time”. Even after I opened my own illustration office, and even after becoming a professor at Tokai University, I have been doing research on chairs, so I was engaged in two trades at the same time.

While being chased by the payment of dozens of chairs,
my life was healed by fishing and mountain climbing.

In the 4DK apartment I bought, I raised about 700 fish. I collected sweet fish from Lake Biwa and put them in 12 tanks, ranging from large ones with a width of 180 cm to ones weighing 1 ton and small ones with a width of 60 cm. Oh yes, once when I cast a net to catch fish in the Yodo River, it got caught on the bottom of the river and I dived out. It was early April and it was night (laugh). A water change was a big job. You have to put tap water in after descaling. I went to a nearby pond with my children to scoop up small fish to feed the big fish and kept them in a separate tank. Eels and mozuku crabs escaped and went missing, and later the eels were mummified and the crabs came out of the fridge motor compartment covered in dust. It’s hard work, but for me who is busy with work, this was really comfortable time.

Speaking of comforting, there is another thing to do, mountain climbing. Of the 15 days off a year, including the New Year holidays, I took a five-day holiday once a year and traversed the Northern Alps. For that reason, I work without day off for several months, and about two weeks before climbing, I carried my child on my back and go back and forth up the stairs of the apartment to the 10th floor many times to get used to it. In those days, the roads and environment weren’t as good as they are now, so there were times when I got lost in heavy fog, I hurt my knee and dragged my feet down on the way from Mt. Tsurugi to Kurobe River and I finally reached my destination while lighting a match in a curved tunnel with no exit in sight.

My interest in chairs was influenced by my father.
I have been a fish lover since childhood in my hometown of Kochi.

I talked about diving in the river the above. I was born in a small town along the Niyodo River, which became a hot topic in the NHK special “Niyodo Blue” in Kochi, and I grew up surrounded by nature. I would dive into the river to catch sweet fish and eels, and sometimes I would give them to my mother who was running an inn, and received pocket money. My father was an official of the Imperial Household Agency, and later returned to his hometown to work at the government office, as a hospital manager, and as a Shinto priest. He liked furniture, and he always looked forward to coming to Osaka to see the furniture because there was nothing good in the countryside. When I was a university student (Osaka University of Arts), we used to look at furniture together at Yukawa Europe Land, the predecessor of Actus. A bargain chair by George Nakashima or Aalto was about 30,000 yen. It was an era when the remittance was 10,000 yen a month. So, my apartment didn’t look like a college student, with two Hidasangyo armchairs, a coffee table, a rocking chair, and a study desk and chair that my father ordered when I was in 3rd grade.

I’ve always thought, “I’d like to listen to some interesting episodes that come out while Mr. Oda explains the chairs.” When I met him this summer, I told him about it, and when I said to him, “Do you have the top 5 chairs that you had a hard time getting?” Soon after, Mr. Oda himself proposed to the Oda Collection Organization, which led to the realization of this series. The 1st time is definitely the LC-4, the first of over 1,400 chairs. I feel like I saw the magic of the Oda Collection (laugh) in the “how to buy” this chair and the “how to earn” that makes it possible. Even so, his love for beautiful things runs deep. From the next time, I would like him to show us a deeper story. (Nishikawa) 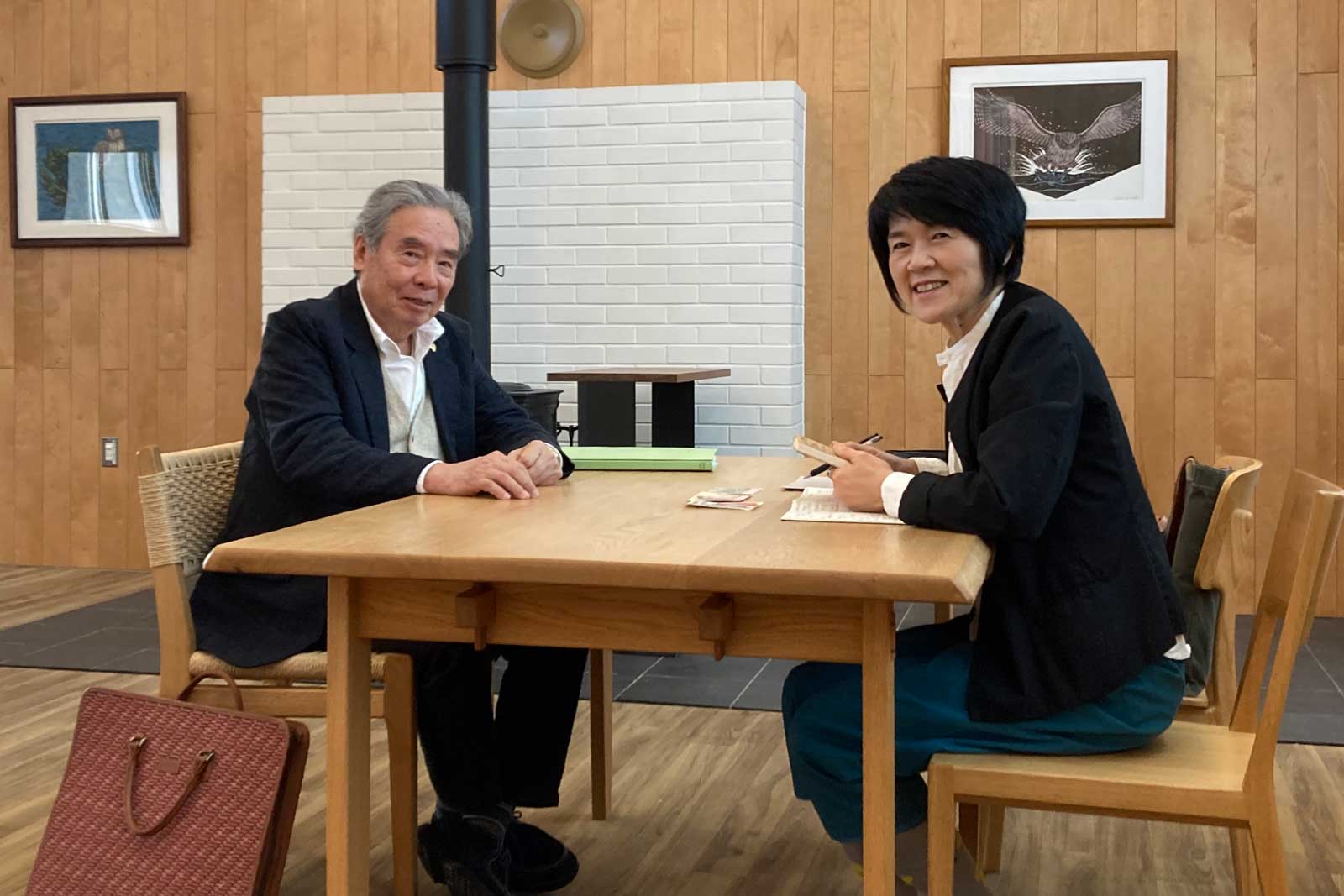 Copywriter Kano Nishikawa
After working at a design office in Tokyo and Sapporo, I started working as a freelancer in Asahikawa in 2001. Until now, I have been involved in the production of advertisements for local companies and organizations, including Asahikawa Furniture. I have known Mr. Oda for about 30 years through my work.